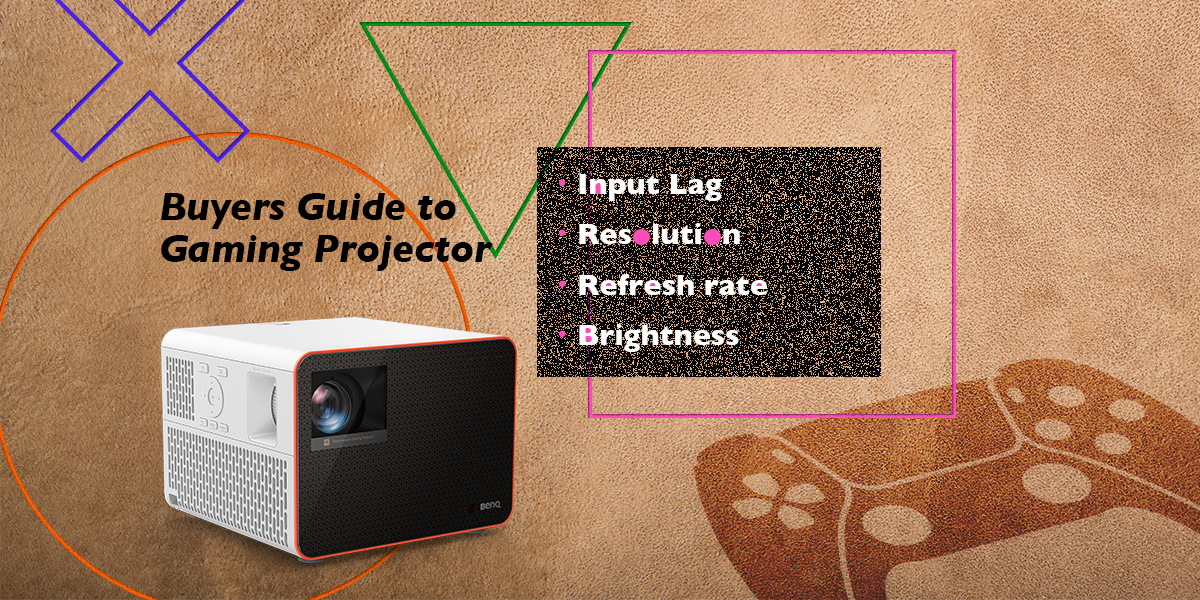 Projectors have come a long way and are now not just viable for top of the line gaming, but in many ways preferable to even the best TVs. In terms of resolution, input lag, brightness, and color fidelity, projectors have reached parity with TVs. The old myths about projectors being slow, loud, and complicated to setup or only suitable for massive rooms no longer hold true. Advances in technology make new gaming projectors versatile, quick, and unmatched if you’re interested in massive screens. So here’s a quick buying guide that highlights all the essentials you need to know when shopping for a gaming projector.

If you want to play games on something that rivals a movie theater screen size-wise, read on.

Most people do their gaming on TVs and monitors, and of course we have nothing against that, as BenQ makes TVs and monitors. However, as such we also know the limitations of TVs and other fixed-form displays. You buy a 65” TV or a 34” monitor, you’re locked into that size. With a projector, you get a size range, with something like 80” to 200” being very normal. No other display type offers this. When thinking of price per inch, projectors come out far more cost effective than TVs, unless you can afford something like this.

If you feel that a large screen presents more immersive experiences, then obviously projectors have TVs beat. For the most part, TVs currently top out at 85” effectively. Anything larger is both rare and incredibly expensive. But for projectors, 85” is the entry point with regards to screen size. But, there’s a lot more to consider when buying a gaming projector beyond simple screen measurements. The differences between TVs and projectors also aren’t limited to how large of a display you get, so let’s proceed.

Important Things to Keep in Mind

You don’t want to get just anything labeled as a gaming projector. Words come easy, but proof is in the specs and performance. Games keep getting prettier and more visually demanding, hence the ever-improving hardware needed to run them. For serious console and PC gaming, you’ll need a projector that’s up with the times and capable of also keeping up with the most graphically-intense games.

Image quality and how each person appreciates visuals may be subjective, but the most essential aspects everyone needs to keep in mind are resolution, brightness, and refresh rate. Get a fancy projector that’s got 4K and strong HDR but only 30Hz and it’s basically useless for gaming. And then there’s response and latency, which are absolutely essential for gaming. You’re looking for projectors that have as little input lag as possible. Again, you could find a projector with 4K, HDR, and 60Hz, only to realize the average latency is over 100ms. That’s no good, and really hampers your gaming experience. Conclusion: do your research and make sure the specs line up.

Side Note: Can Home Cinema Projectors Work for Gaming?

Generally no. This isn’t a vice versa situation. Gaming projectors work nicely for movies and TV, but projectors designed specifically for cinephiles don’t handle gaming well at all. There’s nothing wrong with that. For people that only want movies and TV, a home cinema projector arguably offers better image quality than a gaming-focused projector. However, the projectors we recommend have such admirable specs that they’ll do great for content such as Blu-ray discs and streaming apps.

Response is everything when gaming, because video games are obviously an interactive medium. You don’t want too much lag, as that renders every type of game nearly impossible to enjoy, especially reflex-centric first person shooters, sports games, racers, and so on.

Input lag: the total time that passes from pressing a button on a controller or keyboard and the corresponding action taking place on-screen. While anything under 40ms is considered OK, really good gaming projectors now offer 4K 60Hz in 16ms and 1080p 120Hz in 8ms. Those numbers put them at parity with the best TVs for gaming and mean an effective absence of input lag. Even competitive gaming works great on such projectors, so if you love your multiplayer gaming, prepare to get it on a huge screen.

Refresh rate: number of frames per second. With the arrival of Xbox Series consoles and PS5, 60Hz has become the absolute minimum refresh rate. Thus, a gaming projector must offer at least 60Hz, or sixty frames per second. The more the merrier, although realistically 60Hz is fine given the capabilities of current consoles.

Big screens mean you need higher resolutions to keep things clear and avoid blurriness. Do not compromise or get tempted by suspiciously cheap prices on projectors calling themselves “gaming”.  You won’t like 720p basic HD on a 100” screen. The minimum resolution to look for is 1080p, or full HD, but 4K ultra HD is better. You may need to trade refresh rate for resolution, and that’s up to you to decide. The best 1080p projectors offer sleek 120Hz, while 4K is capped at 60Hz for now. As mentioned above, Xbox Series consoles and PS5 aim for 4K at 60Hz and are unlikely to veer to far off from that. They do have a few games that run at 120Hz in lower resolutions, but that may not be worth giving up 4K for. The higher resolution comes in handy for other forms of entertainment, like movies and streaming apps. Don’t forget the current consoles have models that ship with a 4K Blu-ray player, and why would you want to waste that?

Only you know what’s best here. But in general, the choice boils down to 1080p 120Hz and 4K 60Hz with the finest gaming projectors on the market. Which one you choose depends on your preference. Do you like more detailed visuals? Then go with 4K. Or are you a frame rate fiend? In that case, the 120Hz path is for you.

Just like TVs, projector placement needs to be taken into account. The location you have in mind for your gaming projector makes a huge deal of difference. Ambient lighting, distance to screen, availability of space, and even acoustics are all important. Space availability is particularly important, because that determines the maximum screen size you can project onto.

Brightness: TVs denote this in nits or candelas, while projectors have standardized ANSI lumens. You want a bright projector with powerful light output, as that allows the image shown to shine even when ambient lighting is strong. Projectors that have great specs but low brightness will disappoint, because visuals will get drowned out by daylight or even standard room lights at night. You don’t want to get locked into a projector that demands you play in a completely dark room, which isn’t good for your eyes anyway. The minimum output you need from your projector when showcasing onto a 100” screen is 2000 lumens, but more is better. A gaming projector with 3000 lumens will be great.

Throw distance: this doesn’t mean how far you can throw a controller out of a window in frustration, rather how far a projector needs to be from a screen for any given image size. Older projectors required very long throw distances, so they were placed far from the screen. That necessitated huge rooms and created all sorts of problems, like people walking in front of the screen. Thankfully, modern high quality gaming projectors operate with short throw. You get a 100” image from as little as six feet, or two meters. That’s in the same ball park as seating distances from much smaller TVs. With short throw, you don’t need a large room, and you place the projector upfront, so that moving around doesn’t interfere with display.

Other Things to Remember

A good gaming projector doesn’t neglect sound. Even if you plan to use headphones or a dedicated sound system, having capable speakers built into the projector provides a nice audio safety net. Unless you plan to do your gaming in a stadium, you’d be surprised just how good the speakers are on the best gaming projectors, offering 2.1-channel audio that’s very clear, powerful, and directionally-accurate.

And please make sure your intended gaming projector has HDMI 2.0b ports, and at least two of them so you can connect two consoles at the same time. Some models may try to sneak in HDMI 1.4 still, which can’t do 4K 60Hz and may prove unreliable for 1080p 120Hz. Others may advertise HDMI 2.0b, but only have one port. So, insist on two HDMI 2.0b ports as a starting point. Again, more is always good.

Big Up Your Game

You now have a better idea of what to look for during your quest for a great gaming projector. We hope this has helped and that you find boundless happiness with your big screen gaming. It’s definitely something to behold and very different from the confines or a regular TV. Let us know how it goes on social media, we’d love to hear from you.