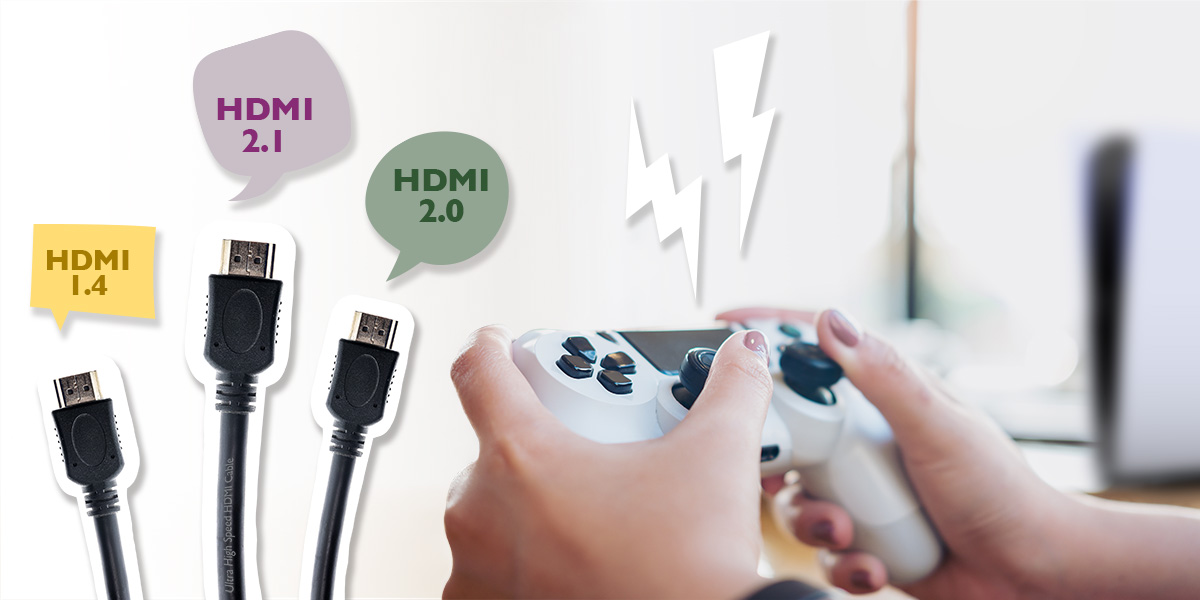 Back in the 2000s when HDMI first emerged as a leading connection standard, the thinking was that all HDMI cables were the same, because the demands put on cables by devices were nearly all identical. That’s not the case anymore. If you’re using a BenQ gaming projector that’s capable of 1080p 120Hz or even 4K 60Hz, then you want to make sure you have the right HDMI cable for the job when connecting a PS4, PS4 Pro, or PS5.

HDMI cables vary by generation and bandwidth. The first popular variety, HDMI 1.3, grew into dominance during the age of PS3 and Xbox 360 and was sufficient for sub-1080p resolutions at up to 60Hz. The HDMI organization has since then renamed versions for easier sorting and improved clarity. Thus, we have standard HDMI, high speed HDMI, premium HDMI, and ultra high speed HDMI. Let’s take a look at what kind of HDMI cable you need for each of the three current PlayStation consoles.

As a word of caution, whatever you do, do NOT purchase any cable that states “standard HDMI” on the packaging. Not only is this version quite old by now, it’s not capable of 1080p but rather 1080i, or interlaced. Similar, but not the same.

As the most demanding throughput a base PS4 can put on an HDMI cable is 1080p 60Hz with HDR, high speed HDMI or HDMI 1.4 is more than enough. You can even get 4K 30Hz with this cable, but the base PS4 doesn’t support 4K so that’s a moot point.

We consider this the entry level console when considering the capabilities of high end gaming projectors. PS4 Pro was designed with 4K 30Hz or 1080p 60Hz in mind, and offers better HDR implementation than the base PS4. However, unlike launch PS4, PS4 Pro has lots of games running in custom resolutions between 1080p and 4K while maintaining framerates over 30Hz and often close to 60Hz. Thus, a high speed HDMI cable may not be enough. We recommend going with a premium HDMI cable, or HDMI 2.0. While HDMI 1.4 (high speed) has a bandwidth of 10Gb/s, HDMI 2.0 (premium) bumps that up to 18Gb/s, or nearly twice.

Equipped with an ultra high speed HDMI port, or HDMI 2.1, the PS5 aims to deliver 4K 60Hz-120Hz and certainly 1080p 120Hz. Nearly a year after launch, only a couple of games have managed to reach 4K 120Hz, while the majority are 4K 60Hz or lower. That means a premium HDMI cable, the same one we recommend for PS4 Pro, is still just fine for a PS5. Premium HDMI even supports 8K 30Hz, and that’s not happening on the PS5. Games in 4K 60Hz with HDR work perfectly on premium HDMI (HDMI 2.0), with room to spare. Note that the PS5 ships with an ultra high speed HDMI cable, so if you have that, use it. All HDMI versions are backward compatible.

What Happens If I Use the Wrong Cable?

The firmware on all three consoles continues to improve and offers smart bandwidth detection. If you force a PS5 to connect to a fast 1080p 120Hz projector using high speed HDMI (HDMI 1.4), the console will simply not make 1080p 120Hz available and will limit you to 1080p 60Hz. If you use HDMI 1.4 to connect a PS4 Pro or PS5 to a 4K 60Hz gaming projector, the same thing will happen. The 4K resolution will not appear in settings and you’ll be limited to 1080p 60Hz.

You won’t get blank screens, sparkles, or color shifts. If those occur, that’s a sign of a bad cable or that you somehow managed to force too much bandwidth on the cable, which is unlikely. Visual errors are by this point in HDMI and hardware evolution nearly always signs of faulty cables or failing GPUs, and are very rare.

We hope this quick guide has helped you choose the right cable! Make sure to look at the packaging and read the specs, as those are clearly marked in nearly every case.