Curved PC and console gaming monitors with flashy numbers like 1000R ,1800R and 1900R have become popular, but what should you know before taking the plunge?

Welcome to our brief but insightful guide to curved gaming monitors. While flat screens have been the norm from the decline of CRT displays in the late 1990s, a desire for something different and more “immersive” brought curves back into the equation in the late 2000s. Gradually, curved monitors reclaimed significant market share, by the mid 2010s becoming commercially viable and vastly more affordable.

If you’re planning to purchase a new monitor for your PC and console gaming but feel like something other than the usual flat screen, a curved panel offers an interesting option. Why should you get a curved gaming monitor and what needs to go into considering the purchase? Let’s take a quick look.

And if you need a slightly more detailed comparison between flat and curved monitors, we have you covered.

Clearly curved gaming monitors require more advanced manufacturing than their flat counterparts, as circuit boards, transistors, and LED layers must conform to an angled surface rather than a uniform flat rectangle. This is primarily why curved monitors of any given size and spec still cost a little more than a flat display of the same size and feature set. That’s the first important thing to understand. Other than the curved design, everything else is the same. All the fundamental specs and technologies are identical across curved and flat monitors. The curve doesn’t provide any performance gain, it simply offers a different viewing experience that many people find more pleasing.

One specification that curved monitors have and flat ones do not is a number/letter combo that looks like 1000R, 1800R, 1900R, and so on.

This spec represents the curvature of the monitor or the magnitude of bending. The R here stands for radius and is measured in millimeters. When we say the radius is measured in millimeters, we mean the span that forms a portion of a radius, determining curvature. Keep in mind monitor curvature and size are not the same and the number does not refer to the width of the monitor, but only to the radius.

That’s in general, because it is technically possible to make a 49” 1000R monitor, but that would be an extremely aggressive curve, with the edges nearly touching each other due to the combination of a very wide monitor and very pronounced curve.

Two more features to keep in mind are screen ratio and resolution. Curved monitors are almost always ultrawide 21:9 or 32:9 by now. That’s different from the 16:9 of nearly every flat monitor. So please remember curved monitors use ultrawide native resolutions, like 3440 x 1440 and 3840 x 1600. These are modified QHD and 4K resolutions, and while they look great, not every game supports them, and many desktop apps may not look right. Just remember that when deciding on a curved display.

People often forget that most movie theater screens have a slight bend to them, and the original ones from the 19th century were even more curved. This is because obviously humans see in “3D”, with depth of perception. Flat monitors can’t really hope to match that, but curved gaming monitors and other curved displays do a much better job of approximating our natural eyesight. They’re also far less prone to color fade and viewing angle issues because with a curved display, every pixel is always the same distance away from your eyes. There’s no part of the screen that closer or farther. This results in an effective “wraparound” feel that leads to the much-celebrated “immersion factor” of curved displays.

And as we all know, immersion rules the day for serious gaming.

Additionally, eye fatigue takes a setback with curved gaming monitors because they match the natural way you see the world so much better. Even issues like glare are far less defiant when using a curved monitor.

Racing and flight sims have created a close bond with curved gaming monitors over the last decade, beginning with hardcore enthusiasts and gradually expanding into the mainstream. With current technology, a curved monitor is the closest to immersive 3D you can get in a racing or flight sim without use of VR hardware, and definitely a more realistic way of viewing things than a flat screen.

Beyond simulators, curved monitors work great with pretty much every genre, except perhaps puzzlers, where an even surface that doesn’t curve lines may prove a little more beneficial.

If you’re serious about Gran Turismo 7, Forza Horizon 5, or NASCAR Heat 5, the wide and natural viewing offered by curved displays cannot be beat.

In sims, curved gaming monitors have a definite advantage. For every other genre, it’s really a matter of taste. We don’t feel that a curved surface provides any discernible advantage in first person shooters, for example. But still you can play on a curved display to enjoy immersive experiences such as Dying Light 2.

Curved gaming monitors feature on the product lines of every monitor manufacturer now because they offer a popular option. The primary motivation to get one is to try something different and new. Curved monitors are easier on eyes and provide a better, more comfortable viewing experience with certain gaming advantages for those that favor simulation titles. However, in terms of performance and core specs like refresh rate, response time, color depth, and panel technology, they’re the same as flat screens.

Visuals of course determine just how much you enjoy gaming, and added features that optimize visuals make a big difference. MOBIUZ monitors feature Light Tuner and HDRi to enhance details and create a smart HDR effect that adjusts to game visuals and ambient conditions. With those, your immersive experience gets to a higher level.

Light Tuner is a customer BenQ technology that ensures contrast and brightness are balanced, and thus prevents detail washout or crush in bright and dark areas of the screen. This is especially helpful when looking for hidden enemies!

HDRi technology further auto adjusts screen brightness and color temperature based on visuals at any given time and ambient light conditions in your room. It creates a smart and reactive HDR effect that makes game graphics much bolder and more life-like, while reducing eye strain and fatigue to make extended gaming sessions far more comfortable.

On the audio front, MOBIUZ monitors feature powerful dual speakers and customer subwoofer for realistic 2.1-channel sound in all your games. Select models even have an AI noise canceling microphone built in, so if you don’t want to use a headset, we’ve got you covered for audio and chat. With great sound already on the monitor, including an AI noise-cancelling microphone, you don’t need to invest in external speakers or headphones unless you want to!

Curved vs. flat monitors, a question that must be answered. 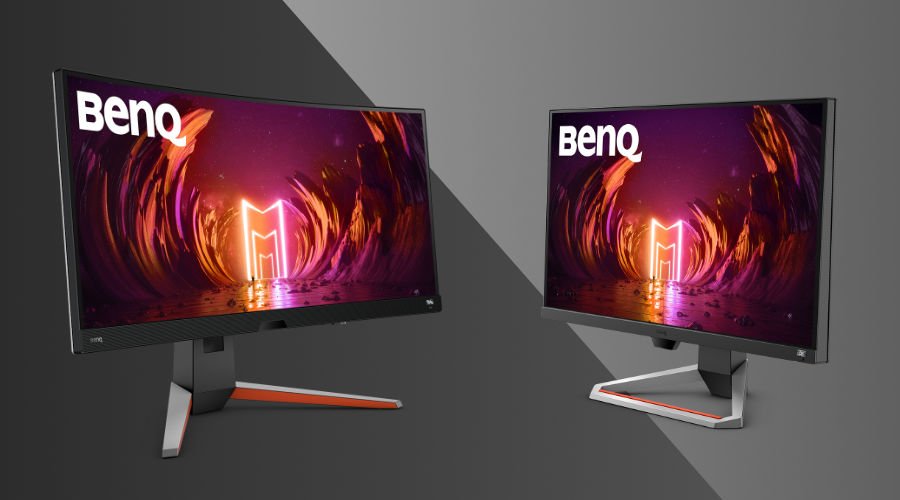 How to Choose a Curved vs Flat Monitor

How to Choose a Curved vs Flat Monitor ›

When comparing curved vs flat monitors, the main point of curved monitors is to better accommodate the natural depth that human eyesight has 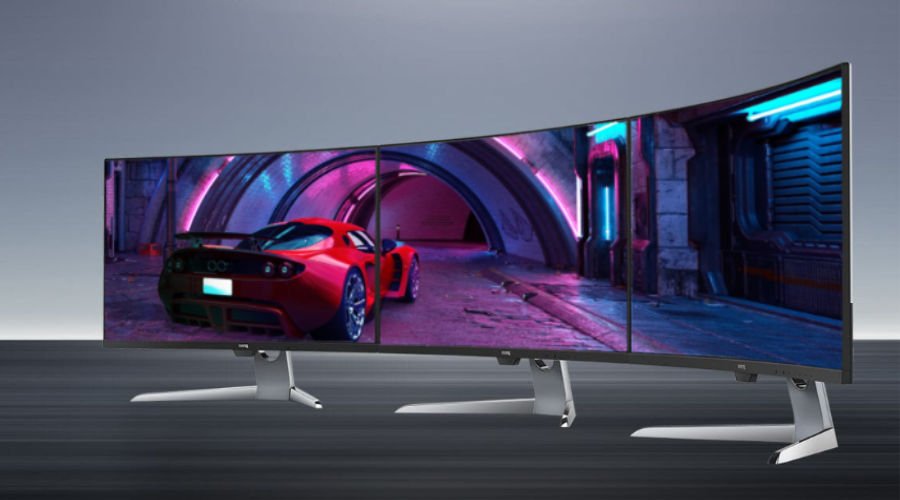 Ultrawide curved gaming monitors go perfectly together with sim racing titles, much more so than triple flat screens or even VR. Take a closer look at why that’s the case. 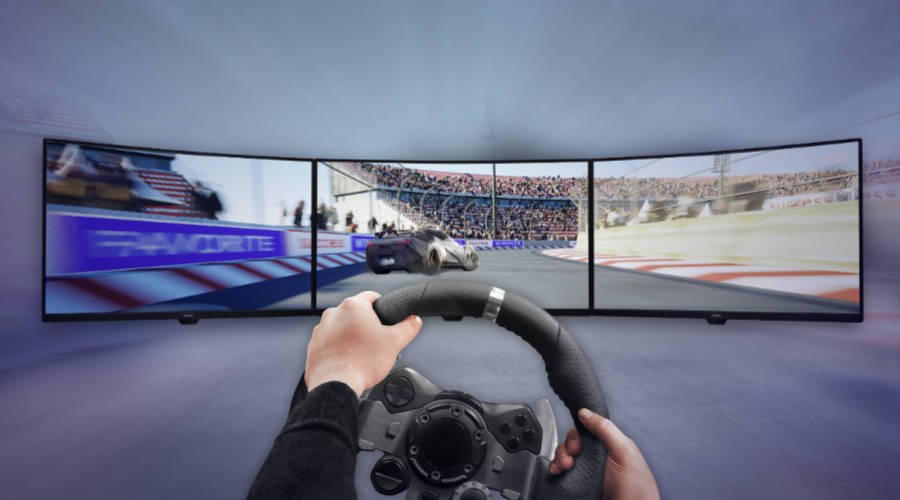 When assembling a racing sim setup, pay close attention to everything from the steering wheel and pedals to the monitor, with ultrawide curved being the best choice