We use cookies and similar technologies to process personal information for the operation of our website, statistical analysis, and providing targeted advertising. We share information about your use of the site with our advertising partners who may further share it with additional parties. You may opt out of performance cookies here, and learn more about how we use cookies here”
Cookie Setting Find More
BenQ Display Solutions Resource Success Stories Seoul Hanyoung University Enhances Its Missionary Work with BenQ Classroom Solutions

Seoul Hanyoung University, a theological university in Seoul, South Korea, was still using blackboards and chalk in many of its classrooms. In an effort to bring its teaching facilities up to date, the school decided it was time to adopt electronic whiteboard technology.

The new BenQ displays have made class time more dynamic and interactive. Teachers have been taking advantage of built-in Android to run apps during class as needed. They also appreciate that BenQ’s EZWrite feature allows them to use the display just like a traditional blackboard, while also empowering them to make annotations on top of documents, photos, and videos.

Seoul Hanyoung University has come a long way since its humble origins. Originally founded in 1970 by Dr. Han-Young Cheol as a seminary, the school was officially upgraded to a university in 1996. Since then, the university has been very active on both educational and theological fronts. Students receive theological training at the school, and many of them also work as missionaries both in South Korea and abroad. In this way, the school works to bless the entire world with its message of grace and love. But as the school’s message continued to spread, its technology began to fall behind. Until last year, the school was still using ordinary blackboards in many of its classrooms. In a country like South Korea, which is known for its technology prowess, these old-fashioned pedagogical tools were not up to snuff. Students, teachers, and administrators all felt the school’s classrooms were due for an upgrade. 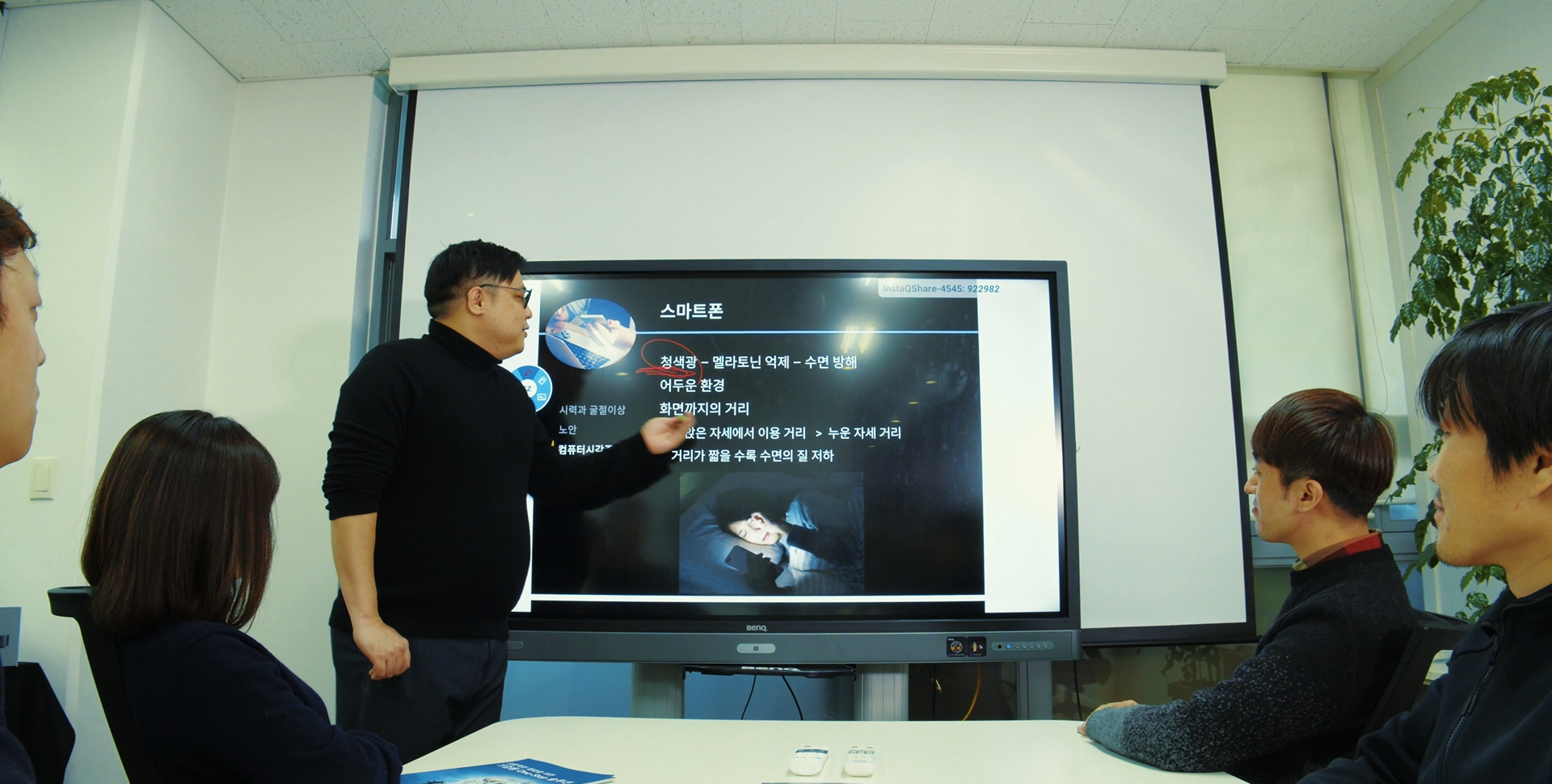 Finding a solution that would seamlessly integrate with existing IT equipment was a top priority. With this goal in mind, school staff soon recognized that BenQ’s line of education flat panels would be the ideal solution. The BenQ RP6501K 4K UHD 65” Education Interactive Flat Panel Display proved to be the perfect size for Seoul Hanyoung’s classrooms, and it also offered a full array of teacher-friendly features. The first key feature that caught the attention of the staff at Seoul Hanyoung was the RP6501K’s accurate touch-sensing capability. The RP6501K boasts Intelligent Handwriting Recognition, which can instantly convert written text, numbers, and figures into clearly legible digital text. It also features Brush Mode, which allows users to paint on the display as though they are using a real paintbrush.

Furthermore, the RP6501K supports Dual Pens, allowing two users to write on the display simultaneously with different colors. The second key feature is the RP6501K’s built-in Android OS. This operating system allows the RP6501K to operate as an interactive learning center without need for an external PC or smart device. Teachers can load apps to the OS and use them during class time, or they can use the web browser and built-in document reader to directly call up web content or documents at will. Best of all, BenQ’s exclusive EZWrite technology allows users to annotate on top of any content they wish. For example, teachers could play a video and draw notes on it in real time. With EZWrite, the possibilities are endless. Finally, because they were designed specifically for classroom use, BenQ’s Education Flat Panel Displays come with features designed to protect the health of students and teachers. The RP6501K is a low blue-light display that employs both flicker-free and anti-glare technology. This trio of features reduces eye strain and keeps students and teachers feeling fresh. Also, a germ-resistant coating on the display helps prevent the transmission of germs, ensuring that teachers and students can use the touchscreen with greater peace of mind.

The RP6501K has been a major hit at Seoul Hanyoung University. Professors are satisfied with the screens, which provide plenty of space for writing notes while also delivering comprehensive multimedia features. Meanwhile, the panels have cut costs by eliminating the need for chalk and replacement projector bulbs. Students feel more engaged during class time, and administrators feel as though the interactive displays have brought Seoul Hanyoung University into the modern age. Everyone agrees that with BenQ’s help, the university’s message of hope will spread further than it ever has before.