What is the best wireless presentation system for Macs?

Apple MacBook's have been growing steadily in the Enterprise space. Apple’s recent partnership with Deloitte who called Apple products “essential to the modern workforce” and ComputerWorld’s prediction of 2019 being the “Year of the Mac” highlight this trend for IT managers who are responsible for managing corporate meeting room resources.

So what is the best wireless meeting room solution for a meeting room full of executives looking to share Keynote presentations from their MacBooks?

While there are many resources available such as “How to Select a Wireless Presentation System” that can guide managers on the key decision points of different wireless solutions, this paper will look at common questions when evaluating meeting room environments in a Mac-based company.

Running a long cable from the projector to the table works well only when there is only one presenter in a meeting. For meetings with multiple presenters presenters either have to pass the cable around or take time to move to where the cable is located. Today, dynamic meetings such as scrums make it important to quickly switch from one presenter to another without disrupting the meeting flow. Wireless presentation systems are able to accomplish this and are significantly less expensive and more flexible than a traditional hardwired AV switcher solution.

Q2: What about outside visitors who need to present from Windows or other devices?

While your company may standardize on MacBooks as the standard presentation platform, over 70% of the notebooks sold today still use Windows. This makes it tricky for companies looking to use Mac-oriented devices such as Apple TV to wirelessly share content. In addition, many Windows-based companies have tight security restrictions on what (if any) third party software can be installed on a notebook due to avoid risks of malware. This can pose a significant challenge for WiFi-based presentation systems that use special apps to securely present on a screen. The simplest and best solution for visitors is to have them use a wireless transmitter or “button” to connect directly to their notebook, digital camera, or Chromebook– regardless of the operating system.

The color bit-depth affects the maximum total number of colors that a monitor can display; if the color bit-depth is insufficient, color and gradient discontinuation can easily be seen when photos are displayed on the monitor.

Q3:How do you connect with new MacBooks using ThunderBolt 3 vs. older MacBooks with HDMI?

In 2016, Apple announced that it would be switching to USB-C as its standard MacBook interface using Thunderbolt 3. Since Mac’s tend to have longer replacement cycles than other notebooks, the chances are there are going to be a mix of old and new Mac’s that will need to use the wireless presentation system. The BenQ InstaShow starter kit can be ordered in both with either the new USB-C ThunderBolt 3 compatible buttons or the traditional HDMI connector to fit your organizations needs. Many companies add additional button kits so that each meeting room has both types of connectors enabling a simple and fast connection during the meeting without an adapter.

Besides supporting older MacBook Pro and MacBook Air notebook models, the InstaShow HDMI buttons can also be used with Windows notebooks as well as other HDMI device such as a document cameras or Blu-Ray players that might be used in the meeting room. Each receiver can support up to 16 different buttons – essentially replacing the traditional AV switcher in a small to medium sized meeting room.

Q4: How do you keep a Keynote presentation secure?

Keeping a corporate meeting room presentation secure and confidential is an important factor in a wireless presentation system. To protect presentation and other content from unauthorized viewing or recording, the InstaShow button creates an encrypted wireless channel that can only be decoded by a single InstaShow receiver. When a presenter presses his button to present, it takes between seven and fifteen seconds to create an encrypted channel to the receiver, and when it is safe to transmit, the button ring turns green – indicating that there is a safe and secure connection. To learn more about the other security protections built into the InstaShow, you can download the InstaShow Security White paper here.

Q5: How much IT support is needed to install and manage InstaShow?

Because each InstaShow receiver creates its own separate and private wireless network to manage the presentations, the unit can be installed in just minutes with little to no support needed by the IT staff. This was recently validated by the publication My Tech Decisions, as well as other IT managers, who installed a unit in less than two minutes into their staff conference room with no IT support. One advantage of the InstaShow is that the unit does not need to be connected to the corporate network in order to function. For remote management, each InstaShow has a LAN port that can be used to manage settings and troubleshoot remotely by the IT staff if so desired.

InstaShow was designed from the ground up to be able to be used with MacBooks and shares many of the design elements such as rounded corners, high-quality materials, and clean lines that fit in with any modern conference room or huddle space.

The InstaShow has won more design awards than any wireless presentation system, including the IF Design Award, Good Design Award.

Using a InstaShow is as easy as plugging in a button to your Mac and pressing a button to present. There is no software to load, no network login, and no special codes to enter. Its sole purpose is to make you and your content look good.

The InstaShow has a special video mode that enables you to play iMovie and other video content without dropping frames or choppy audio and keeps your audience focused on your message. 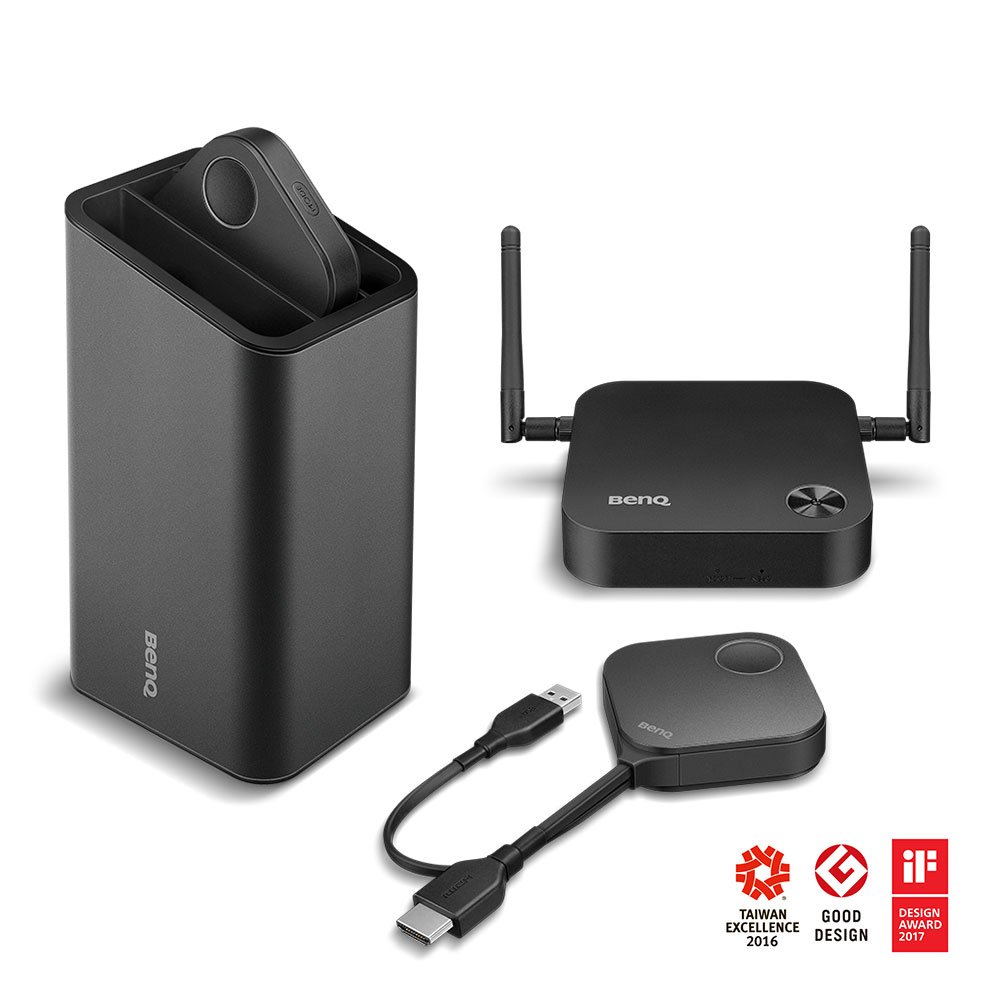