The BenQ EX2780Q with its native QHD 1440p IPS panel and fast 144Hz refresh offers a perfect match for the Xbox Series S, a console designed for 1440p 120Hz gaming. Better together, for sure.

The new Xbox Series X and PlayStation 5 target 4K 60Hz gaming, as do new RTX 30 series graphics cards from NVIDIA and Radeon 6000 series cards from AMD. In all of this 4K as the new normal it’s easy to forget many people still prefer a middle ground. Maybe for budget reasons, maybe due to preferring high framerates over raw pixel counts. Good thing Microsoft has people covered in this middle ground realm with the Xbox Series S. While sharing much of the architecture of the more powerful Xbox Series X, the Series S effectively guarantees QHD 1440p gaming at a whopping 120Hz, or frames per second.

And the BenQ EX2780Q just so happens to be the perfect match for the Series S. We’ll explain.

The Xbox Series S is tiny. It’s basically the size of three Xbox controllers in terms of mass and volume. That means this console will easily fit on any desktop, unlike the much bulkier Series X and PS5. The Series S literally plops onto the rectangular base of the EX2780Q without much overhang. That’s perfect if your desktop area happens to be cluttered or you just want to keep it neat. It’s also ideal if you’re primarily a PC gamer but want to dabble in some console action on the side without committing to big spending or big, power greedy devices.

The EX2780Q has a lovely IPS panel that ramps up to 144Hz. And it's native 2560 x 1440, or QHD. That happens to be the native, default resolution of the Series S. Told you the two were made for each other. The Series S will run most titles in QHD 120Hz, which fits brilliantly within the EX2780Q’s 144Hz refresh rate.

The Series S will offer better implementation of variable refresh rate and high dynamic range than current generation consoles like the Xbox One and PS4. Good thing the EX2780Q has HDR, made even smarter by BenQ HDRi technology, which fine-tunes HDR so that it’s more than just eye-scorchingly bright images thrown at your unsuspecting face.

The EX2780Q has an HDMI connection, naturally, so your new Series S won’t even compete with your PC over inputs. While the Series S comes with HDMI 2.1, it’s not really needed. HDMI 2.0 handles 1440p QHD at 144Hz and even slightly higher (165Hz is doable). The 120Hz of the Series S will run super smooth on the EX2780Q.

Doesn’t it? Especially with the EX2780Q featuring 2.1-channel audio. That’s twin 2W speakers and a 5W subwoofer. If you think monitor sound is an afterthought, you really need to try the EX2780Q. Then again, we do recommend using headphones whenever other people may be disturbed by the lively hobby we call gaming.

So there you have it, we just found you the perfect monitor for the Xbox Series S. Achievement unlocked. 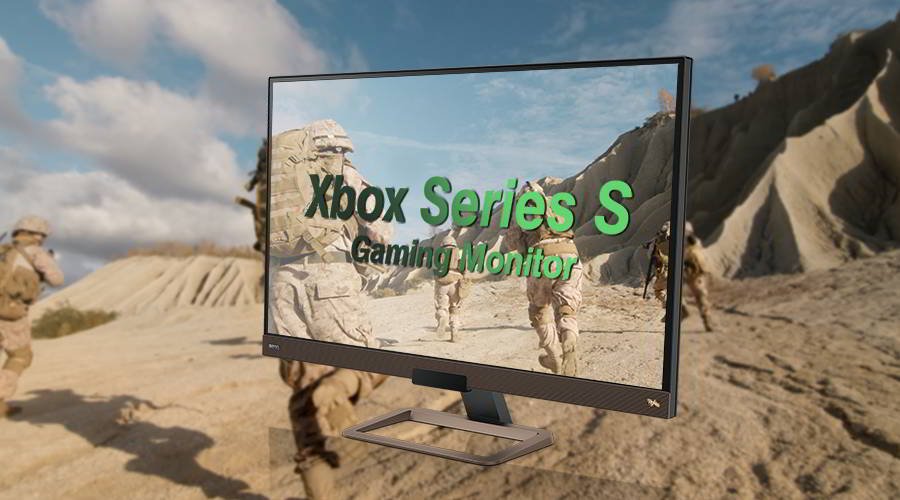